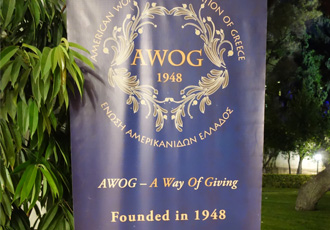 Of timeless value, the Greek olive tree is one of the oldest symbols in the history of mankind. It is a symbol of health and longevity, perseverance, prosperity and growth, and of course, peace. It is a gift from the gods linked with renaissance and light.

The Olive wreath, also known as kotino, was the prize awarded to the winners at the ancient Olympic Games and is one of the most well-known and often-used symbols in Greece.

Our AWOG logo was selected with this in mind, in order to honor our host country. The 1948 in the center of the wreath represents the year we were founded.  The Greek-American flags, we think, speak for themselves – inseparable and intertwined in friendship.

The Acronym AWOG became “A Way of Giving” a long time ago by our then Honorary President, Libby Burns, wife of Ambassador Nicholas Burns, during an event when she spoke with much affection and respect about our Organization.

Wherever AWOG goes, our banner goes with us: at lectures, fundraisers, dinner dances, bazaars and galas.

It represents who we are and what we do.

Any cookies that may not be particularly necessary for the website to function and is used specifically to collect user personal data via analytics, ads, other embedded contents are termed as non-necessary cookies. It is mandatory to procure user consent prior to running these cookies on your website.