The year gone by, 2021, was full of challenges globally, locally and personally since the Covid-19 crisis and its impact were/are responsible for causing a lot of fear, uncertainty and anxiety across the planet. With the disruption of work schedules, family routines, and economic instability, it is understandable that in one way or another, each one of us is suffering.

We, at the American Women’s Organization of Greece, while living in these extraordinary times, have done our very best to meet these challenges head-on and to continue with our mission of helping those in need. Here you can read about the highlights of AWOG’s year and see how much we were able to accomplish under duress. As we look ahead to the current year, 2022, our fervent hope is that with the support of our sponsors, we will achieve even more! May we all have a healthy, joyous and productive year!

Following AWOG’s 2020 online Christmas Bazaar, Community Services met in January of 2021 and resolved to make a 500 (five hundred) Euro donation to each of the institutions listed below:

During 2021 the AWOG Heart Pillow Project continued at full speed, with donations of Heart Pillows to the following hospitals in Attiki:

The total number of Heart Pillow donations for 2021 comes to 502!

The hospital directors and staff doctors who accepted the pillows from AWOG members were very appreciative and thankful for AWOG’s support and concern for the well-being of mastectomy patients. 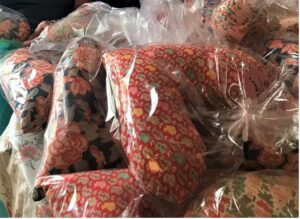 The Literary Club continued its monthly meetings on Zoom where a wide variety of pieces was discussed.  Below is a list of authors whose writings we talked about, sometimes in detail, but often using them as a basis for going off on tangents, always relating the readings to our own lives.
Short stories by:

After reading memoirs by Hemingway, Auster and Wolff, some AWOG members wrote their own memoir pieces which were “published” in our monthly Bulletin and were appreciated by all.

There was a greeting by Cindy Harvey, Public Affairs Officer, U.S. Embassy,         Athens, followed by the main speaker, Mr. Constantinos Velentzas, who spoke         about well-known Philhellenes like Dr. Samuel Gridley Howe, but also others less well-known such as George Jarvis, J.P. Miller, David Farragut, and Dr. Howe’s       wife, Julia Ward, author of The Battle Hymn of the Republic.  It was fascinating to    learn about the support given to the Greeks through their fundraising and personal        involvement in the Greek Revolution.  Finally, the event came to an end with      comments by two of Dr. Howe’s descendants, Ms. Gillian Kellog and Mr. Nathan   Ticknor who joined us from the United States.

Mr. Velentzas, is the founder of the Museum of Philhellenism, Zissimopoulou 12,   Neo Psychico, which was ten years in the making and which we hope to be able to visit post-Covid.

This website uses cookies to improve your experience while you navigate through the website. Out of these cookies, the cookies that are categorized as necessary are stored on your browser as they are essential for the working of basic functionalities of the website. We also use third-party cookies that help us analyze and understand how you use this website. These cookies will be stored in your browser only with your consent. You also have the option to opt-out of these cookies. But opting out of some of these cookies may have an effect on your browsing experience.
Necessary Always Enabled
Necessary cookies are absolutely essential for the website to function properly. This category only includes cookies that ensures basic functionalities and security features of the website. These cookies do not store any personal information.
Non-necessary
Any cookies that may not be particularly necessary for the website to function and is used specifically to collect user personal data via analytics, ads, other embedded contents are termed as non-necessary cookies. It is mandatory to procure user consent prior to running these cookies on your website.
SAVE & ACCEPT